The Domain Join Assistant for Univention Corporate Server (UCS) automatically integrates Ubuntu and many Ubuntu-based systems such as Linux Mint into a UCS domain. That way, administrators no longer have to manually configure the client computers. Users can then log into the desktop environment with their UCS credentials – on any client in the domain.
The tool offers a graphical user interface and a command line tool for admins who prefer to work on the shell. We have just released a new version of the Domain Join Assistant that comes with various improvements and supports the latest Ubuntu and Linux Mint versions. In this article I’m going to show you how the tool works and I’m going to introduce the new features.

END_OF_DOCUMENT_TOKEN_TO_BE_REPLACED

Sönke Schwardt-Krummrich
From Practice, IT in Schools, Univention Blog
0

Since the beginning of spring, school authorities and other educational institutions have been faced with the challenge of continuing their teaching with no or only limited face-to-face interaction. This article introduces the web conferencing system BigBlueButton, which may be a possible solution to this problem. In the first part of the article I would like to give you an overview of the most important functions of BigBlueButton and briefly discuss what you need to pay attention to the sizing of the servers and how to deal with problems caused by NAT and firewalls of the users. In the second part, I will explain how to integrate BigBlueButton into your UCS environment step by step so that users can use it with their usual credentials.

END_OF_DOCUMENT_TOKEN_TO_BE_REPLACED

SURF is the cooperative association of Dutch educational and research institutions. One of the goals of our organization is to facilitate research with HPC (High Performance Computing). We run national super computer clusters and provide computing power, data transport, data management and analysis for the Dutch academic community, i.e. to universities, universities of applied science, senior secondary vocational institutions (MBO), UMCs and research institutions.

END_OF_DOCUMENT_TOKEN_TO_BE_REPLACED

The release of version 4.4-5 of Univention Corporate Server (UCS) brings a series of technical innovations for the Single Sign-on of users to applications connected to UCS. There are also new functions for the UCS Self Service. Users can now register themselves at a UCS domain via the User Self Service and create a user account, assign a user name and password, and store further information. Performance improvements in the LDAP directory service have accelerated the replication of groups. And in preparation for UCS 5.0, which is scheduled for release at the end of this year, our development department has made more than 45 UCS packages compatible with Python 3. So when you upgrade to UCS 5.0, the corresponding code parts in UCS will run for both Python 2 and Python 3. In addition, we have also published a preview of the new UCS 5 portal as an app in the App Center for testers. It already brings important new technical features such as embedding apps directly into the portal page.

END_OF_DOCUMENT_TOKEN_TO_BE_REPLACED

Create an SSO Login for Applications to Groups

Since the introduction of single sign-on support in Univention Corporate Server (UCS) via Secure Authentication Markup Language (SAML), an administrator can assign a user within the user object to those applications, called service providers in the SAML context, he or she can log in to via single sign-on. As for administrators in organizations with many users, this assignment can be time-consuming.

END_OF_DOCUMENT_TOKEN_TO_BE_REPLACED

We are in the transition to a “new normal”. However it will look different from the normality before the corona pandemic. Step by step areas of life are being ramped up that until recently were in an unprecedented exceptional situation. This involved a lot of stresses, but it has also brought new and valuable insights into how we can organize our lives. The significance of digital communication options has increased enormously. The use of digital technologies has been accelerated tremendously. It became clear that it is important to have systems that function independently of individual providers or even of foreign countries. Systems that are resilient and can react quickly and effectively to a crisis so that stable conditions can be restored.

END_OF_DOCUMENT_TOKEN_TO_BE_REPLACED 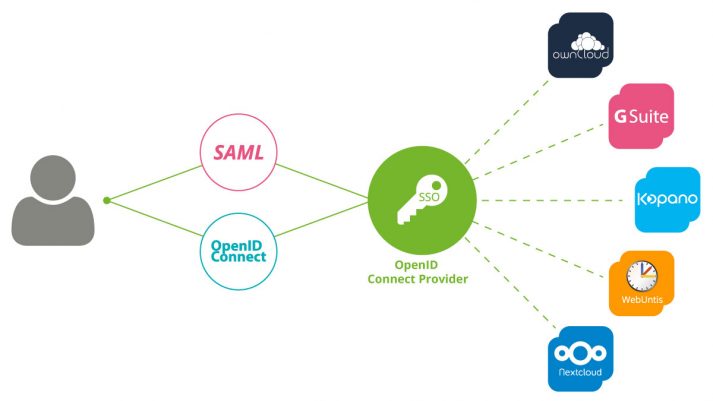 The integration of Kopano Konnect in the single sign-on network of Univention Corporate Server is an additional option for users to access a range of various applications that are integrated in UCS via a single, initial login using their user name and password.
The two authentication standards SAML (Security Assertion Markup Language) and OpenID Connect have already been available to UCS users for some time. So far, however, these two technologies have been two separated worlds. If some of the web services used SAML and others OpenID Connect for the authentication against UCS’ identity management, users were forced to log in twice in those environments with multiple services. With the support of the Kopano team, we were able to release an extension of the app “OpenID Connect ID” in the App Center. This is integrating the two standards with each other and thus allows a single authentication process by the end user.
I would like to briefly explain how a single sign-on generally works with UCS. Then I explain the interaction of Kerberos, SAML, and OpenID Connect and show you which functions the new implementation of Kopano Konnect offers to UCS users.

END_OF_DOCUMENT_TOKEN_TO_BE_REPLACED

Version 4.4-4 of Univention Corporate Server (UCS) comes with some cool new features, one of them being the new AD Connector app. It makes the synchronization of password hashes between a Microsoft Active Directory domain and a UCS domain significantly more secure and less error-prone. While previous versions could only synchronize NTLM hashes, the AD Connector of UCS 4.4-4 also reads newer hashes, the so-called Kerberos keys which allow single sign-on (SSO) to different applications.

I am a second-year trainee at Univention (job description: IT specialist for application development). I was involved in the development of the new feature and mainly had to deal with three tasks: the AD Connector itself, the OpenLDAP overlay module, and the S4 Connector (Samba). In this blog post I’m going to explain what Kerberos hashes are and how I implemented the new feature.

END_OF_DOCUMENT_TOKEN_TO_BE_REPLACED

Film Tutorial: How to Add a Windows 10 Computer to a UCS Domain