Felix Botner
Apps and Partners, From our Development, Univention Blog
10

In the UCS Dashboard app, we now have the first (beta) version of a new dashboard based on the Open Source solutions Grafana® and Prometheus. The app allows administrators to check the status of domains and individual servers on different dashboards quickly and simply. The dashboards can be accessed simply via a web browser, access a database in the background, and deliver updated reports on certain aspects of the domain or servers continually.

The app is made up of three components:

Monitoring and Analysis of UCS Domains and Servers at a Glance 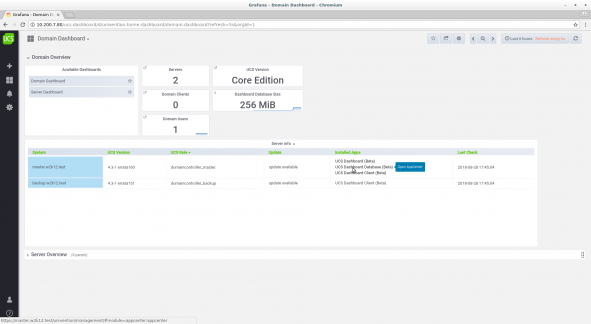 We want to offer administrators of larger environments in particular support in their administrative work with the new dashboard. For example, the boards will show when updates are available for different servers in the environment and what recent important changes there have been in the domain (e.g., different memory utilization). This information provides administrators with a rapid overview of the current status of the domains for which they are responsible, allows them to identify potential sources of errors in good time, and permits them to analyze their IT environments with the aim of rendering them more efficient.

The UCS Dashboard app can be installed from the Univention App Center and set up with just a few clicks of the mouse. A preconfigured mounting option for the web interface to UCS’ central identity management (IDM) system and a collection of standard dashboards optimized for UCS metrics make getting started particularly simple. Further servers can also be integrated via the installation of the UCS Dashboard Client app on the desired system without any further configuration requirements.

Grafana®, a popular monitoring tool among administrators, ensures the clear, web-based visualization of the system information in the form of customizable dashboards.

Prometheus is used for data collection. The Prometheus node exporter regularly collects metrics about the status of the system and makes them available in a simple text format via HTTPS.

The Prometheus database continually requests data from all known systems and saves them as a time series. The database itself can be queried using a special language (PromQL). This is then the task of the Grafana® web interface. Even complex queries can be visualized simply via a set of preconfigured widgets (panels) and their configuration.

All of the necessary components are automatically installed on the target system during installation of the UCS Dashboard app. All that is required to start monitoring additional systems is to install the UCS Dashboard Client app on them.

The Prometheus node exporter and the Grafana® web interface can be expanded as required. In this way, for example, additional metrics can be collected and provided on clients. These data can also be simply visualized using individual dashboards in Grafana®. The principle can be illustrated by the following example:

We want an overview of the number of SSH connections on a server.

First, a script is required on the system (on which the UCS Dashboard Client is installed) to collect the desired data.

Additionally, the data are saved in a special format “Name_of_metric_value” in a file in the

directory. In addition to the standard metrics collected by the node exporter, all text files in the directory above are also searched for metrics and additionally offered.

A cron job ensures the regular updating of the data on the system.

The Prometheus database always collects all the data offered up by the client, so there is no further action required.

In order to visualize the data, the first step requires creation of a new dashboard in Grafana®.

A new (graph) panel is added there so as to be able to visualize the dataset as a time series. 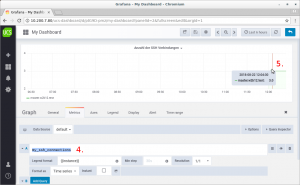 The name of the new metric is now set as the metric in the panel and, in principle, the graph is ready.

This rudimentary example obviously only shows a fraction of the overall possibilities. Further documentation on the Prometheus node exporter and Grafana® web interface can be found on GITHUB at: https://github.com/prometheus/node_exporter and at http://docs.grafana.org/.

Productive Version of UCS Dashboard App Planned for This Fall

We have decided to release the UCS Dashboard app as a beta version first of all in order to gauge the interest in this kind of application. We would really appreciate your feedback, particularly with regard to the information on your UCS environment displayed on the dashboard. Please give it via the comment field here on this page or via our product feedback form.

If considerable interest is shown in UCS Dashboard, we plan to release an official version of the app for productive use this fall. If possible, we also intend to integrate the user feedback received by that point along with additional desirable features suggested by UCS users. This final version will likely only be made available to customers with an Enterprise subscription.

Felix Botner works as Open Source Software Engineer at Univention since 2009. Mostly he is engaged with the enhancement of the Univention App Center. He is also working in the field of Directory Services, respectively Samba.