We’ve just published the second point release for UCS 4.4. Apart from some bug fixes and corrections, we’ve also implemented some new features and, of course, we’ve put some work into numerous apps.

Looking back at the first point release (UCS 4.4-1 in June 2019), our REST API for the Univention Directory Manager was still in beta stadium. Good news: the interface for accessing the directory service is stable now. The API connects applications to the UCS directory service; access is granted via a web service using HTTPS, and data is exchanged JSON format. So, the REST API offers the same functionality as the udm command line tool.
For example, it simplifies the maintenance of user properties or computer objects from connected systems. Developers of applications offered in the Univention App Center also benefit from the new, standardized access because they are no longer limited to the UDM Python interface. The REST API of the Univention Directory Manager is by default activated on all UCS 4.4-2 DC Master and DC Backup instances.

During the initial setup of UCS there is the occasional hiccup when generating and sending/receiving our license. Until now, the error messages sent by the system didn’t contain enough information about the encountered problems. We have now improved the dialog our users see when the automatic generation fails. The system will also send out more meaningful messages to our developers to help with the debugging. 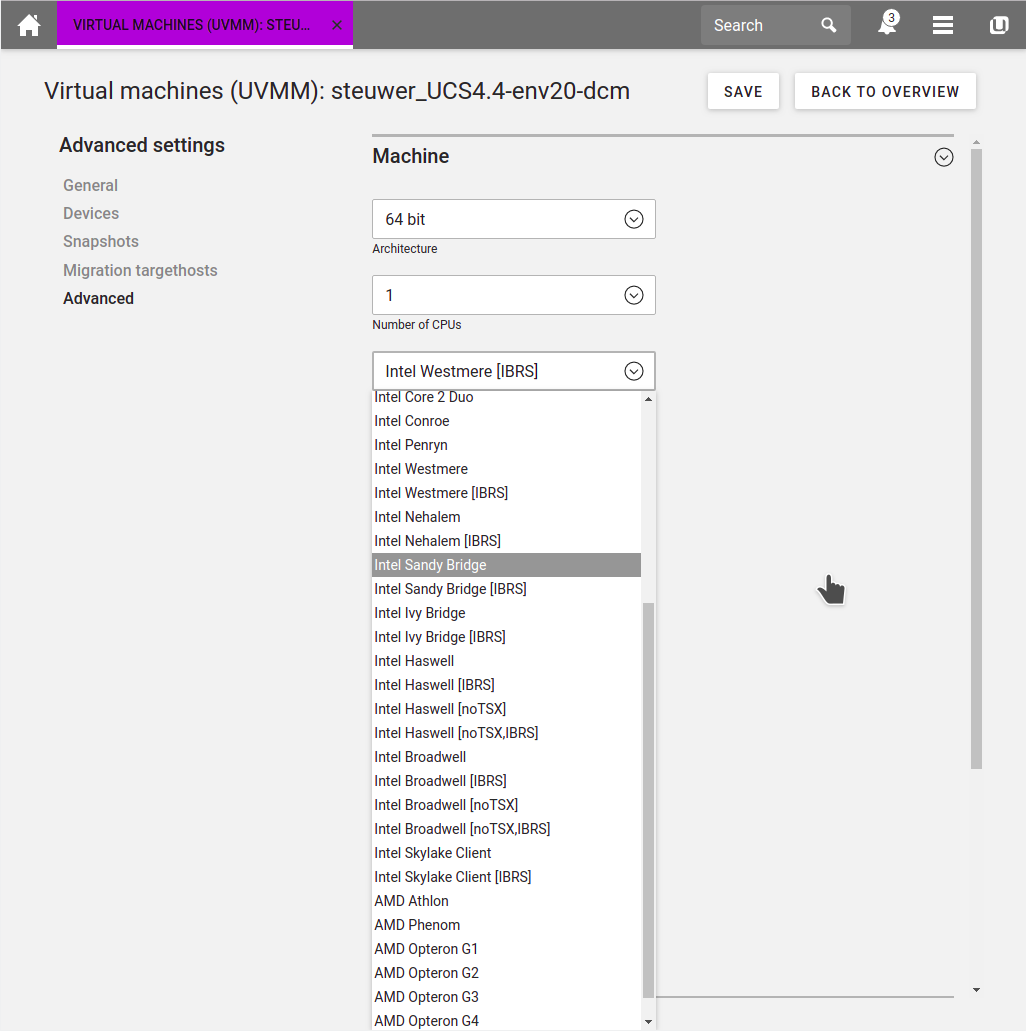 The UCS Virtual Machine Manager has been improved. It has a new drop-down menu in which you can select the emulated CPU type. Until now, this required using the command line – now you can choose the virtual machine’s processor from the menu. In addition, the configuration dialog now contains a new checkbox at the bottom to activate the autostart of the hosts. As a result, you can start virtual machines automatically as soon as the guest system starts – regardless of the state they were in before that.

Debian Base and Docker Engine

Univention Corporate Server is based on Debian GNU/Linux and usually use the latest Debian release as package base. The Debian team recently published 9.11 shortly after 9.10 due to a critical bug in the installer, so we made sure to upgrade UCS as well to be on the same level again. As always: this does not affect security updates of our distribution – they always get included immediately after they’ve been released to guarantee a stable and secure system.
The new UCS release includes a new Docker engine which is good news for all ISVs (Independent Software Vendors). In future, app developers will be able to implement more complex scenarios in their Docker compose files. That includes defining more than one container and setting up relationships between the containers. The new Docker engine is definitely going to improve multi-container apps that need to start more than one Docker container.

Fo our Microsoft Office 365 Connector that offers users of UCS domains single sign-on access to Office 365, we have improved the control of session time-outs. In the past, some users had to authenticate to the mobile apps several times a day. This has been fixed, and administrators can now define after how many days or weeks users are prompted to re-enter their password.

Of course, we’ve added new apps to the Univention App Center. Apart from the Open Source Kanban board Wekan, we’ve included the helpdesk and support software Zammad, the ERP solution Odoo, and the enterprise version of the DevOps platform GitLab.

So far, UCS 4.4 has seen 287 Errata since the initial release. The complete list is online, and here are some highlights of UCS 4.4-2:

A complete list of changes to UCS 4.4-2 can be found in our Release Notes.

As you can see, we’re constantly improving our products. If you have a feature request or suggestions for further improvements, we look forward to hearing from you. Please send in your feedback via our blog or via help.univention.de.