Nico Gulden
Apps and Partners, From our Development, Univention Blog
0 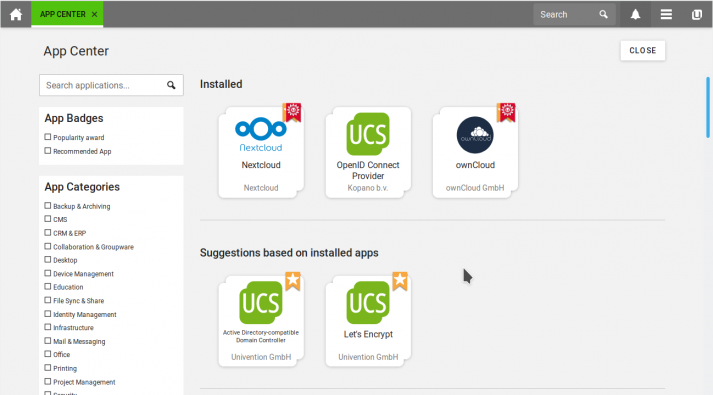 At Univention, we are constantly thinking about how we can add benefit and value to our Univention Corporate Server (UCS) and App Center. One idea born from this is the app suggestion system, which I would like to introduce to you in this article. I would also like to give you some insight into how we work with hypotheses & tests in such projects at Univention. Plus, you will learn how, contrary to many other systems, we at Univention have given top priority to the protection of personal data.

The Univention App Center is the place to go to in an UCS environment to install UCS extensions or third-party solutions to UCS. About 90 Apps are currently in the App Center, a good 50 of which are from other software providers. For any system administrator, our App Center reduces the complexity of managing the IT environment, as installation, integration and updates of apps can be done easily and centrally there. With the constantly growing number of apps and the multitude of possible combinations, however, it is not that easy for administrators to keep track.

Inspiration & Idea – Finding the Right Apps for My Environment

Inspired by numerous webshops, which navigate their users and buyers with suggestions under headings such as “Customers who have looked at this article have also looked at the following” through the flood of offerings to the products they are probably also interested in, we wanted to transfer an adequate suggestion system to apps that are used in UCS environments.
To this end, we first identified the most common combinations of apps currently in use in UCS environments. From the installation of thousands of systems, we know that, for example, the Let’s Encrypt app is very widely used together with the Kopano Core, Nextcloud or ownCloud apps. Based on the apps that are already installed in the environment, the system administrator will be suggested further suitable apps with the new mechanism in the future.
Most suggestion systems of other services, e.g. for music such as Spotify, for videos and films on YouTube or Netflix, for contacts in business networks or for friends in social media networks, include the behaviour of users in their selection process. For the App Center, we have deliberately set ourselves a different focus. The personal user behavior is not recorded and analysed. Instead, the evaluation for the suggestions takes place anonymously and locally on the own UCS system after an evaluation of the suggestion list stored in UCS.

How did we Proceed? – Hypothesis & Test

In order to ascertain whether our suggestion system actually meets the needs of administrators and users, we began formulating a hypothesis and testing it using the “Build – Measure – Learn” cycle by Eric Ries from “The Lean Startup”.
The hypothesis: If a user indeed considers a proposed app interesting, they are more likely to install it than if they had come across it accidentally in the App Center. Our assumption was that the installation rate between the “view app” and “install app” actions is on average at least 20 percentage points higher for a proposed app than for the same app if it had not been proposed.

The test: With Errata-Update 110 in May the App Center frontend code was extended, so that in the App Center overview in UCS under the already installed apps a further “line” with app suggestions was displayed. The test included a static list of app suggestions which, depending on the apps already installed, suggested among others Collabora, Kopano Core, Nextcloud, ownCloud, ONLYOFFICE, Let’s Encrypt, CUPS, DHCP Service, Fetchmail, the software installation monitor, Samba 4 and Self Service. 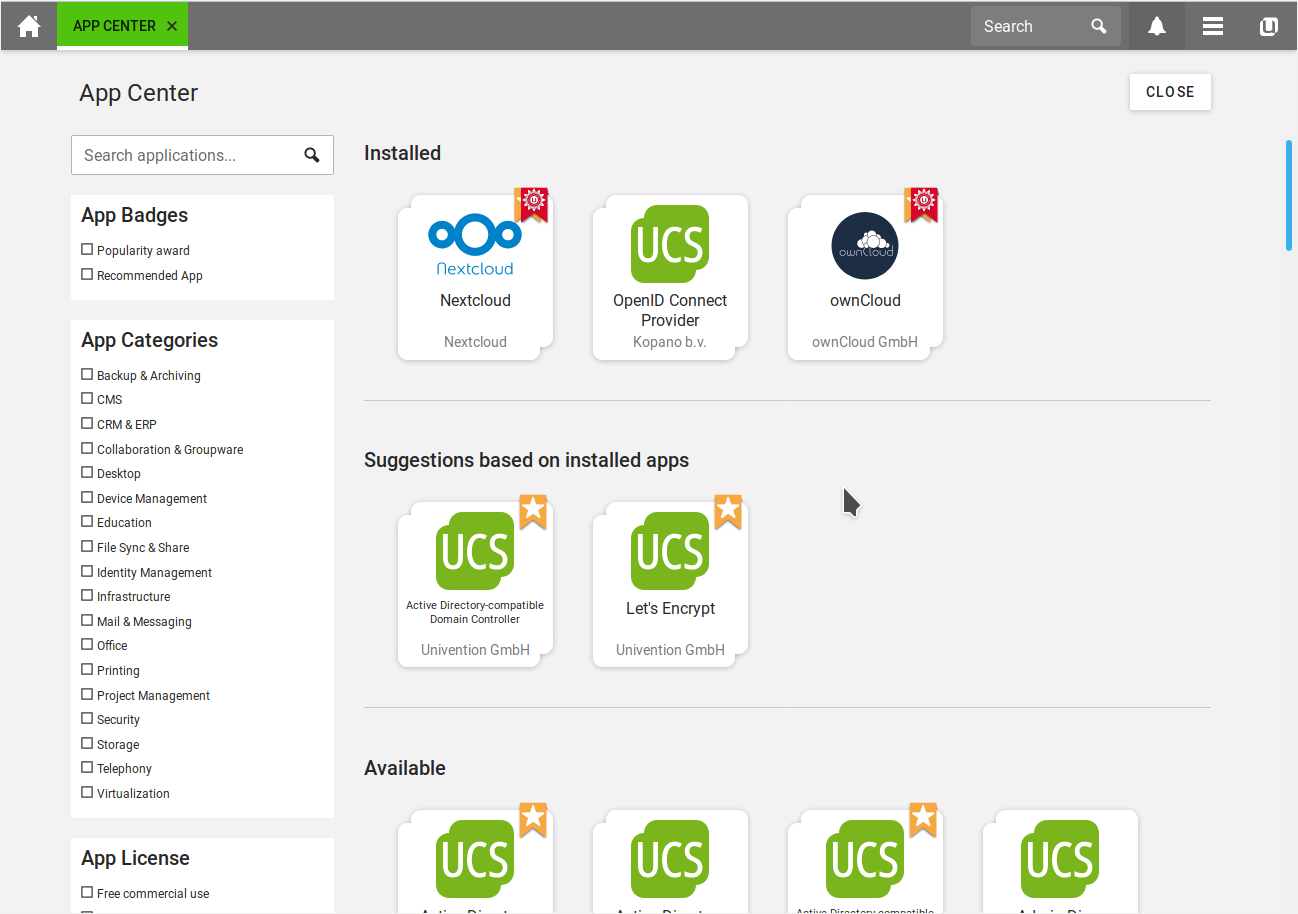 The basis for this list was an analysis of the top apps in the App Center, as to how often other apps are installed with the respective app.

Three weeks after the errata update was released, we evaluated the results. At that time about 30% of the active UCS systems had installed the errata update.
The installation rates of the proposed apps were on average 32 percentage points higher compared to the same apps when not proposed. Evidently, the administrators found the proposed apps so useful that they decided to install them as well.

Next Steps & Outlook – Suggestion System to be Expanded

At first, the suggestion system was deliberately kept simple and short. We will now continue to expand the original list of suggestions. In the medium term, our vision is for an automated suggestion system to support the creation of the list. We have a large database, which in its abundance is manually laborious to view. Whether automation will help here has yet to be scrutinized by us.
The suggestion system also makes it possible to focus more on apps with matching themes, such as groupware and messaging or file, sync & share and online office solutions.

I am interested in your thoughts on our App suggestion system.

I look forward to your comments under this article or via our feedback channel.