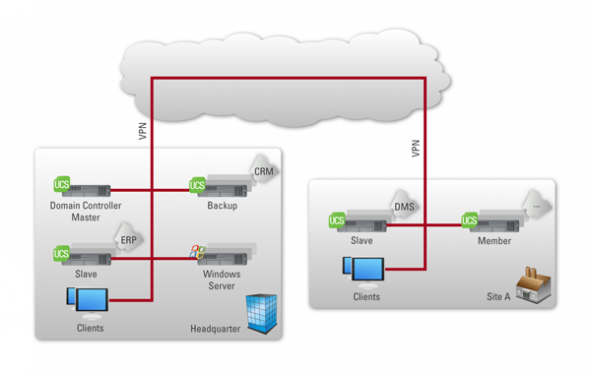 The terms domain and domain controller are often used when speaking about organizations’ IT infrastructures. But what exactly is behind these terms?

Read our brief article, in which we use Univention Corporate Server to exemplify what a domain and a domain controller are and what functions they have.

What Is a Domain?

A domain is a conceptual entity that is characterized by a common security and trust context. This means, the members of the domain know and trust each other. External systems and users do not have access to the resources and services provided within the domain, such as computers, files, etc.

Structure of a Domain

Members in a domain can be, for example, users and groups, but also client computers and server systems. The core component of such a domain is the information about who is a member and how this member can authenticate, i.e. can prove his own membership.

Definition and Task of the Domain Controller

In such a domain, various services are offered for which authentication is necessary. That is, the users and computers must demonstrate that they are a member of the domain before they get access. Examples are file and print services. Various methods can be used for authentication, such as LDAP authentication, RADIUS, or Kerberos (see below).

A domain also always has a name. Computers such as clients and server systems that are members of the domain, have a so-called Fully Qualified Domain Name (FQDN), which is composed of the host name and the domain name:

Through this FQDN systems and services in the network can be identified and found.

These services, which in principle can also be operated independently, are pre-configured and intertwined in UCS in such a way that they are valid and functioning within the same domain. As a result, UCS provides an optimal basis for operating a heterogeneous IT environment in which various systems and services can be connected via the domain functionality.

We’d be happy if this article brought you some light into the “domain jungle”.

Further questions or feedback are welcome!