The fifth major release of Univention Corporate Server is ready and available for download. UCS 5.0 contains new features, has a fresh look, comes with several improvements and bug fixes. The new version also uses a new core: UCS 5.0 is based on Debian 10 (“Buster”) and Python 3.

In this blog post, I would like to introduce the most important changes, give tips for the upgrade process and reveal what we’re planning for future releases.

Univention Corporate Server features a new dark look, also visible during the installation, which gives the distribution a modern and elegant, yet tidy touch. The clean look is also present in the web interface: many areas have been visually reduced. The tiles in the portal, for example, now appear in a new colour theme. 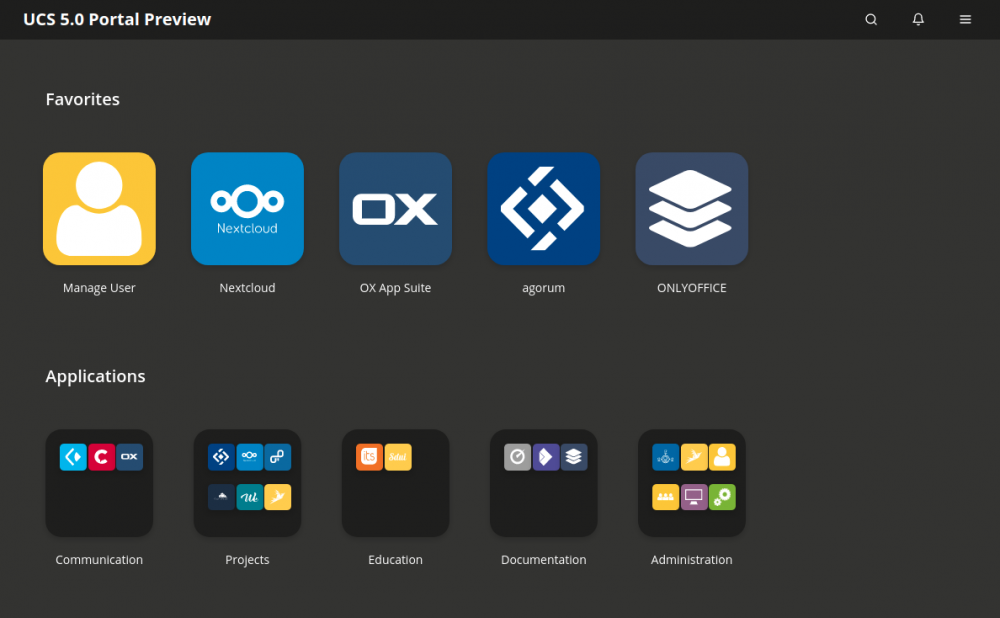 You don’t really like the new color style? No problem: UCS 5 supports themes. All our web interfaces (portal, Univention Management Console, Self Service, Login) can be redesigned with custom CSS stylesheets to change colours and fonts or integrate your own brand.

The portal is always the fist point of contact. Therefore, the new UCS version integrates the Univention Management Console (UMC) for central administration of domains, services, user accounts, and other resources. All UMC modules are available directly in the UCS 5 portal. To help admins stay on top of things, the portal can now group several tiles ­– similar to smartphone or tablet interfaces.

While working on UCS 5, we decided to migrate the portal to the JavaScript framework Vue.js which improves the look & feel and makes everything much more accessible. After the release, we want to successively convert the other UCS web interfaces and expand the portal’s functionality.

The App Center also benefits from the new user interface design, it’s now more clearly structured. We’ve also added some new features. For example, we have significantly improved the App Center’s handling of dependencies between individual apps. If an app needs other components, it is no longer necessary to resolve the dependencies in advance and install multiple apps one after the other. Instead, the installation of all required apps now happens in one step.

Admins can now directly select multiple apps in the frontend to install, update or uninstall them in one go. The App Center collects all necessary information and potential questions about your configuration in advance before (un)installing or updating the apps. 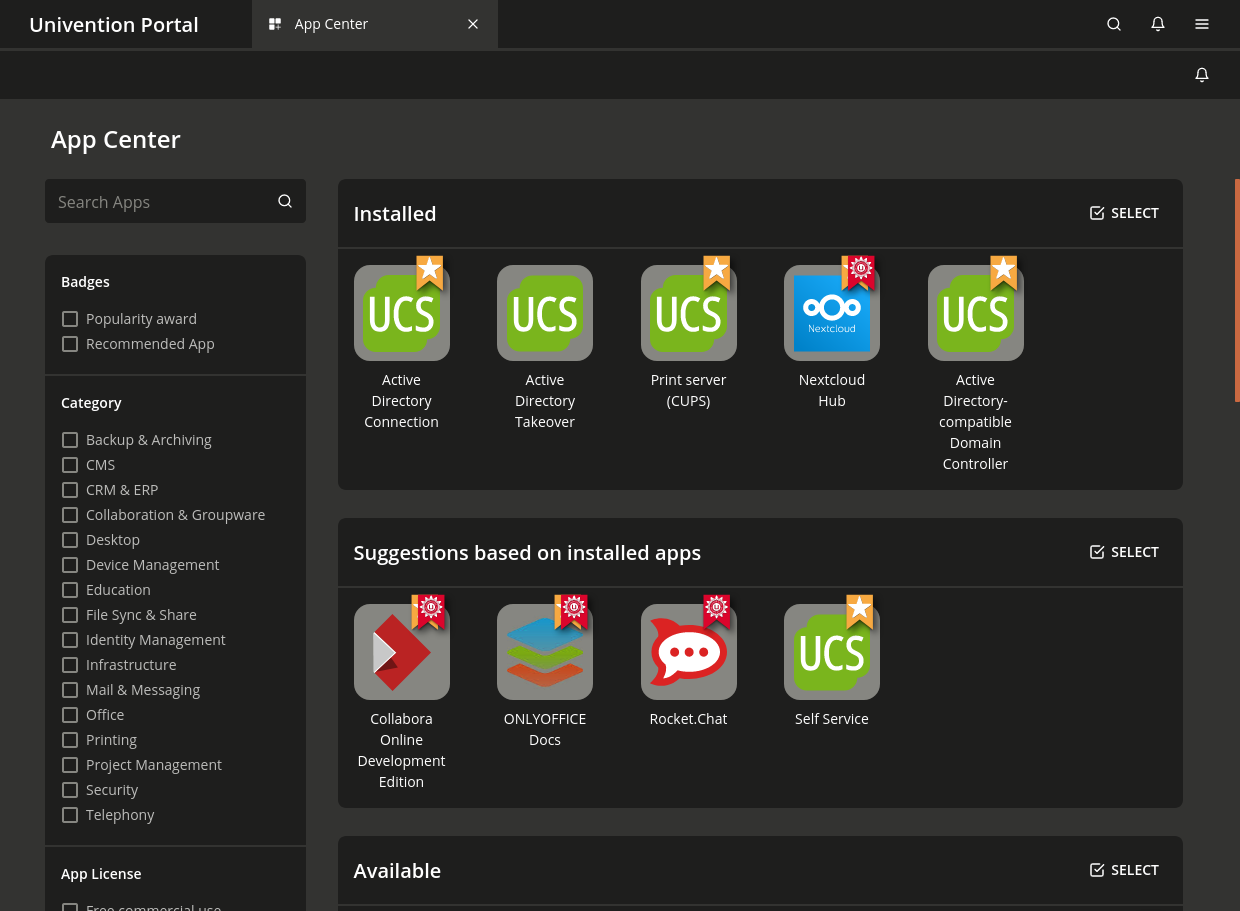 UCS 5.0 is based on the current stable Debian release (10.9) and includes all its packages. We have also restructured our own repositories. Previously, we organised them hierarchically, by UCS release, so we had a separate repo for each patch level release, which led to a somewhat confusing situation. Also, this structure was time-consuming to maintain, because some repositories contained the same package versions, sometimes different versions. In future, we will put all software packages in one repository and maintain a separate packages file with a list of available packages for each release. This not only saves space on the download servers, but also simplifies the processes and speeds up the installation via the package manager as well as the App Center.

The migration from Python 2 to 3 has been completed for all core components. During this process, we adjusted many libraries and other tools. The interfaces for integrating applications have also been migrated to Python 3, which should help developers of third-party apps. Admins running both, UCS 4.x and 5.0, in their environment can roll out Python-based extensions (such as hooks to Extended Attributes of Univention Directory Manager) for both Python versions.

As I wrote in my blog post blogpost UCS 5.0 – Focus instead of feature overkill at the end of last year, it was time to clean up a bit and say goodbye to some applications and projects. It was simply too much work to maintain their integration with the UCS core components – especially during upgrades. By removing features which are rarely or never used, we can now focus on our strengths, including the portal, the Univention App Center and Samba 4.

The following features and apps are no longer part of UCS 5:

We have also parted with old names. As described in the blog article Farewell to “Master” and “Slave”: new names for system roles in UCS 5.0 from November 2020, we have named the system roles differently. UCS no longer uses discriminating terms such as “master” and “slave”, but names which provide an indication of the actual function:

Tips for Upgrading to UCS 5

Images for the new UCS version are available on our download servers. Admins who want to upgrade an existing UCS system can do so via the UMC or the package manager. The new release doesn’t include all apps from the beginning, so not every user can upgrade straight away. Over the next few weeks, we plan to gradually port and release missing apps, including UCS@school, an alerting solution for the UCS dashboard (as a successor to Nagios), and third-party integrations.

Only after that we’re going to announce the end of maintenance for UCS 4. If you update UCS 4.4-x to UCS 5.0, there is an automatic check whether new versions of the installed apps are available. The update will only start after we have released these modules for UCS 5.0.

Here are a few tips for the upgrade from a previous to the new version:

Sneak Preview: What’ s next?

We’re really happy with the new release, its new look and improved core components. However, our work is not yet finished: we’re planning to publish UCS@school 5.0 soon, and we’re also working on porting several other apps. Nagios will be replaced by our own alerting feature in the UCS dashboard which is based on Prometheus and Grafana®.

A light theme as an alternative to the default dark theme will be available in a few weeks. Additionally, we want to further enhance the portal so that users can configure it, for example, select a theme, create their own tiles and group them. We also want to improve the Univention Management Console’s integration.

All details about UCS 5.0

So, what do you think about UCS 5? Do you like it? We’re happy to receive your feedback, so feel free to comment on this article or join a discussion in our forum.