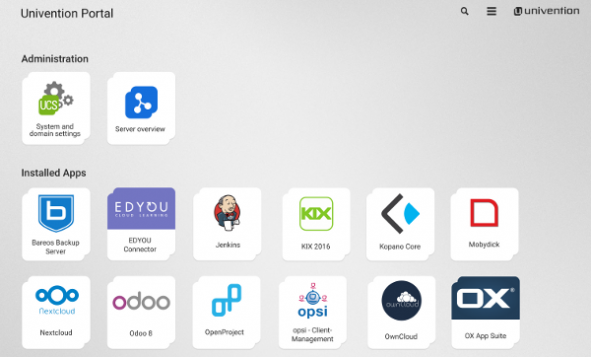 Today, we have published the Release Candidate UCS 4.2. Highlight of the release is the new, freely configurable online portal, which you can flexibly adapt to your needs and the one of your organization. Further, a lot less obvious changes we have made are: We have updated the distribution base of UCS to Debian 8 (Jessie) and we have now made natively available a large part of the Debian packages. Hence, we can provide important security and product updates much faster than ever before.

We will release UCS 4.2 beginning of April 2017. Everyone who is curious to know more about UCS 4.2 can see a live demonstration of the Release Candidate at the CeBIT in hall 3 / booth D36-620 till Friday this week.

Freedom of Choice and Self-Determination with UCS

“We promote digital self-determination and transparency. Organizations can use UCS to determine where and how they want to run services and store their data using UCS, without sacrificing services such as Microsoft Office 365 or G Suite from Google”, says Peter Ganten, founder and managing director of our company. “With our solution, we offer users freedom of choice and facilitate, above all, the management of their IT infrastructure as well as of the apps and cloud services they use. At the same time, we are building a bridge between the various applications and client systems, such as Windows, Linux and Mac, with our cross-platform identity management. The sovereignty over the data of the users remains in their own hands which is of enormous importance in public institutions like schools and authorities.”

With the new UCS 4.2, we have thoroughly developed the operating concept and the user interface presents itself more tidily than ever before. A new, centralized online portal now also allows end users to quickly access available applications via a self-service. And administrators are provided with all the tools for professional IT management. The portal is freely configurable and can be adapted to the individual needs of your organization, be it an authority, school, or large company. If you are a user of an earlier version, you can also benefit from improved usability, support for current hardware, and higher security.

So far we have built UCS on a specially adapted Linux, which is based on Debian 7. With UCS 4.2, Debian 8 (Jessie) will form the new technical base of UCS. With this migration, we will take original Debian packages for UCS. Only certain packages with components that are changed or more up-to-date than those in Debian, such as Samba or OpenLDAP, we then still be created by ourselves. Your organization thus benefits from even faster security updates as well as higher performance levels through Linux Kernel 4.9 with Long Term Support (LTS).

With Samba 4.6 we are one of the first manufacturers to use the newly released version of Samba 4.6 in a productive environment which improves the performance of the Active Directory as well as the exchange of printer drivers with Windows 10 clients.

As a direct installation or Docker image: More than 80 business apps available

The “Dockerization” of over 80 applications in our App Center continues. As an App developer, you can either provide us with your application as a single Docker container or you provide your software as Debian packages and we will take care of converting them into Docker-based applications.

Further information on the UCS 4.2 Release Candidate can be found in our forum.

If you would like to get a live demonstration of UCS 4.2, feel free to arrange a meeting with us.