How can companies make access to their networks and applications securer and more user-friendly at the same time? What’s behind the terms SAML, multiple-factor authentication and single sign-on in this context? Cornelius Kölbel, Managing Director of our partner NetKnights, took the time to explain these technologies to us and illustrate how you can use the multiple-factor authentication solution privacyIDEA and SAML to set up a secure network on UCS plus saving employees time when signing in.

Security Assertion Markup Language (SAML) is a protocol allowing the performance of single sign-on to web applications within distributed networks. At the same time, it is also possible to exchange user information between the different network segments. For this reason it is popularly employed by and between universities and in larger companies with distributed departments.

For the user this means that he now only needs to sign on to the entire network once and can then use every other SAML-compatible application without the need to sign on again.

This brings with it considerably more security, as the user

Furthermore, each additional app which connects to SAML represents a mighty quantum leap in terms of usability in connection with the sign-on.

As sign-ons to the network are now focused on this single point, it’s worth making this sign-on even securer. The efforts involved in increasing the security of this single sign-on step on the SAML IdP are also comparatively small.

privacyIDEA, an app allowing various different types of multiple-factor authentication, has already been available in the Univention App Center since March 2015. Plug-ins can also be used to expand the sign-on to special apps such as OpenVPN or SSH with a second factor. That means that in addition to the actual password (the “knowledge” factor), the user must also furnish proof of a “possession” factor. Sign-on is only possible if both of these factors are combined correctly.

There are a whole range of different tokens available on the market, all employing different algorithms. In addition, there are also tokens which are integrated in hardware or software. Finally, there are even devices in which the secret key is a proprietary invention of the manufacturer or you can customise the algorithm yourself. privacyIDEA supports all of these different features, so among these varying degrees of freedom you’re sure to find the optimal authentication token for your requirements.

An additional app, privacyIDEA SAML, allows you to expand the single sign-on with a second factor as of UCS 4.1. This requires the installation of a privacyIDEA server on any UCS system in the network. In privacyIDEA, tokens can be assigned to domain users. These can be hardware tokens from different manufacturers. Alternatively, it is also possible to generate software tokens in privacyIDEA. The displayed QR code is scanned with Google Authenticator or FreeOTP.

The privacyIDEA SAML app is now installed on the domain controller which is set to run the single sign-on with two-factor authentication and configured against the privacyIDEA server.

As of this point, the authentication prompts are sent directly to the privacyIDEA server. This has already been specified in the privacyidea/saml/url variable. In this way, it’s easy to increase the security for all the connected apps centrally and permanently.

privacyIDEA offers a wide range of configuration possibilities that are too many to assess in detail in this blog article. Extensive information in this respect can be found in the online documentation.

Here we will only look at two aspects as examples: 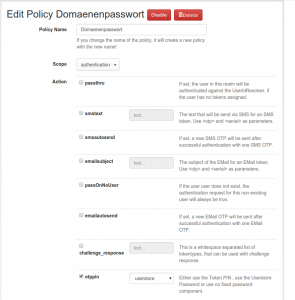 That’s particularly interesting if a second factor needs to be introduced specially for sensitive user accounts. In addition, this function can also be used for a smooth roll-out process.

If you require any assistance deciding which are the right tokens for you and how you can use the techniques described here to make your network securer and protect your data, NetKnights with its many years of experience will be delighted to advise you.

privacyIDEA supports a long list of different authentication devices – including in combination with Univention Corporate Server.

The online documentation contains a complete list of the supported token types.

Cornelius Kölbel has over 20 years of experience in IT and has been specialising in the field of IT security since 2003. In addition, he boasts particular expertise in the fields of content security, encryption and strong authentication. As Head of Product Management, he played a vital role in the development of the authentication product LinOTP and has given presentations about strong authentication at a number of trade fairs and events. In 2014, he followed his heart and founded NetKnights GmbH.