UCS 4.0 introduces the cloud connection to OpenStack and Amazon EC2. In this post, I’d like to share some details about what it is and how it fits into our idea of virtual machine management.

Univention Corporate Server (UCS) delivers a module called “UCS Virtual Machine Manager (UVMM)” for the management of virtual machines in a local UCS-based virtualization infrastructure. With UCS, users have the possibility to extend their server hardware to a virtualization server. Virtual machines on those servers are managed by UVMM, e.g. create, start, stop, pause and terminate. UVMM enables customers to create simple virtualization infrastructures and manage them centrally without extra costs for UCS utilizing the hypervisor technology KVM.

New in UCS 4.0 – Cloud Connection to OpenStack and Amazon EC2 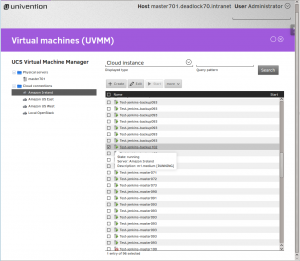 Users of UVMM in UCS 4.0 can create connections to OpenStack environments or EC2 to start and stop or create new virtual instances from templates. UVMM supports OpenStack by default. The support for EC2 can by added by installing the separate app “Amazon EC2 Cloud Connection” via Univention App Center. The screenshot shows the UVMM overview page with one physical server and four configured cloud connections.

Configure your connection and take off

The user needs an OpenStack environment (or access to Amazon EC2) first – either his own “private cloud” or an offering from the cloud service provider of his choice – to configure the cloud connection. The cloud connection has to be configured once in UCS 4.0. Following, the administrator can take off and start new instances there. Depending on the kind of usage, costs arise at the respective cloud computing provider. There are no extra costs for the cloud connection in UCS.