IT for Afghanistan: German project supports the training of young IT professionals

Computing centers of universities in Afghanistan migrate to Univention 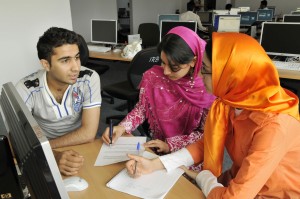 Bremen, September 25, 2014. Since 2002, the center for international and intercultural communication (ZiiK) at the Technical University Berlin (TU) supports universities in Afghanistan with building basic IT services and training IT specialists, students and lecturers.

Since the beginning of the project, more than 4,500 members of the universities’ staff and professionals as well as dozens of academic lecturers were trained. An essential factor for the project’s success was an easy administration and maintenance of the newly installed IT systems from the start without making any compromises when it comes to functions or security. Over the years many different systems had been tried and tested. The most recent computing center at the university of Kandahar has eventually been built on the basis of the enterprise Linux distribution Univention Corporate Server (UCS) by the German company Univention GmbH. After just six months, the good performance of UCS had convinced the persons in charge in Afghanistan and Germany: Until the end of 2015, the remaining four computing centers, which were set up by the Ziik, will have migrated completely to UCS.

The set goal for the project was to create a permanent and stable solution, which offers a good long-term prospect for the country’s future while giving the people hope. According to the project organizers, the IT sector is especially suitable for reaching these goals as it is on the one hand indispensible for a modern economy and on the other hand less initial investments in hardware is needed compared to other industry sectors. The basis for a thorough IT training is a steadily working IT infrastructure. After decades of war, this infrastructure needed to be reconstructed. By now, the computing centers in Kabul, Herat, Masar-i-Scharif, Dschalalabad and Kandahar which were built by the Ziik connect the associated institutes to the internet, provide services like e-mail and web servers and thus facilitate modern communication and education.

In order to achive a high level of independence of the Afghan universities from the German assistance and guarantee the autonomous operation of their computing centers, the Ziik was looking for a suitable operating system. „With UCS, we can train the local Afghan staff much faster and enable them to easily solve everyday problems like resetting passwords, creating new users or rolling out new software“, said Daniel Tippmann, project planner and coordinator at the ZiiK. „This enables us to only maintain the role of emergency support.“ The simple use of UCS via a central graphic management interface, the numerous integrated tools and the easy installation and integration of further software solutions via the Univention App Center give the Afghan administrators an exceptionally large freedom of action and flexibility.

By training Afghan IT specialists in Germany and building the local IT infrastructures, the project has already made huge progress in building self-sustaining academic strucures and training own IT specialists in Afghanistan. Many of the Afghan graduates of the newly designed degree  programs have made their first promising steps into the future by founding their own IT companies.

About Univention
Univention is a leading supplier of Open Source products for the operation and management of IT infrastructures.

The core product is Univention Corporate Server (UCS), a flexible, cost-efficient and successful alternative to server solutions from Microsoft. UCS includes comprehensive Active Directory functions and an App Center to integrate and operate enterprise applications. UCS allows web-based IT management and is well suited for organizations of any size, either as a classic server solution, in the cloud or in hybrid IT environments. UCS is designed to operate as part of existing Microsoft infrastructures and supports the easy replacement of Microsoft Windows domains.

Univention has a worldwide partner network and subsidiaries in Europe and North America.