Today, we have released UCS 4.0-2, the second point release for UCS 4.0 that contains bug fixes, security improvements and many usability improvements based on actual user feedback. Completely new in UCS 4.0-2 is the Linux container technology Docker.

This integration provides the basis for independent software vendors to include their solutions easier and faster in UCS and independent of whether or not the app currently supports UCS. Furthermore, we have made UCS test images available in the Docker repository to allow experimentation and gain first experiences using Docker. Of course, this is only the first step towards enabling the App Center to handle Docker images, a feature that can be expected later this summer.

Integrating Docker into UCS enables us to move towards the following goals:

We thus strengthen the App Center as the central platform to operate different applications in parallel and securely. At the same time, the central management system keeps all operations simple for the administrators.

The Univention App Center’s Newest Features: Automatic Configuration of Your Apps from the App Center when Performing Remote Installation and New Tutorial for ISVs 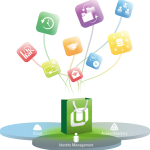 The Univention App Center under the caption: “Centralized App Center”, now also enables the initial configuration of your apps to be performed centrally from the App Center, greatly adding value to the current feature of installing apps from a central Univention Management Console. We further have complemented the documentation for ISVs with a tutorial describing step by step the process of how to package applications for UCS.

If needed, the tutorial also describes how to include the app into the Univention management system in addition to making it available via the App Center.

To improve the user experience in UCS, we at Univention have run a number of usability tests with potential users on a number of UCS features. The results of these tests have lead to a number of improvements within the login process and when importing the license.

Especially in the configuration assistant many descriptions and quick tips were thus greatly improved. On another note of the testers, the re-login after an app installation was eliminated.

One of our customer joined a NetApp-Storage System into his UCS-based Active Directory-domain but experienced problems when mapping user names to SIDs on the storage device. We are happy to say that we resolved this problem for the customer very quickly and are delighted to now provide these improvements to all UCS customers.

We further heard about problems when connecting a Windows 2008 R2 Foundation Server. After joining a Samba 4 domain, this Windows server restarted continuously. We are proud to say that this problem could also be solved, holding true to our promise of providing our customers with full Active Directory compatibility.

In addition, it is now possible to install UCS 4.0-2 using a simple profile and a network connection. A new UCS server will simply be booted via the network, will read a ready-made configuration file, then starts to install the defined software and finally configures the system without any additional user interaction.

Further on, we could improve the Postfix configuration of the UCS mail server allowing a simple activation of the Mail Submission Agent (MSA). This enables a separation between the MSA and MTA, the Mail Transfer Agent. We further disabled additional deprecated encryption protocols.

If you are still using these and are unable to switch, you can reactivate them. However, we strongly recommend to update those mail clients to support current encryption standards.

In addition, we recently started to integrate the IMAP server Dovecot into UCS. We are positive that we will finish the work within this summer giving all UCS users the option to choose between Cyrus-IMAP and Dovecot.

Improvement of the Apache Security Settings

For the Apache web server we improved the configuration options in UCS 4.0-2 and the default settings in a way that disables old encryption settings.

While some very old web browsers might not work with the default settings anymore, we clearly see the security aspect the more relevant. Of course, the last weeks and months have brought many security improvements to UCS 4.0-1. You, of course, can find all of them included in UCS 4.0-2 as well. Feel free to browse the release notes for UCS 4.0-2 to see all improvements in UCS 4.0-2 in detail.

This article covered many aspects of the changes and improvements in UCS 4.0-2 but it is always better to get your own impression.

So: download and test UCS or take a few minutes of your time and start our Online Demo for a first impression. Feel free to discuss with us in the comments below this article or send us your feedback.