In the early days of the Internet and its precursors, connecting a new location (mainly universities) was still a complex undertaking. One trusted in the honesty and sincerity of everyone involved, because after all it was a matter of achieving something together. At that time, security in communication between the locations was less of an issue and the communication protocols used simply sent plain text.

With the increasing spread of the Internet, the need became apparent for communication to take place in such a way that it could not be seen by third parties. One approach that prevailed back then and has been maintained to this day was to continue to use the known and widely used protocols such as HTTP, SMTP, POP, IMAP, FTP, etc., but to build an encrypted transport option around them. This encrypted transport of the network packets was first called SSL (Secure Socket Layer) and in later iterations TLS (Transport Layer Security).

Today SSL / TLS is an integral part of network communication – whether in the company or home network or across the Internet.

For encryption SSL / TLS works with so-called certificates. A recipient (e.g. a web server) with whom I want to communicate is in possession of a certificate file and a secret, cryptographic key. The certificate file contains among other things cryptographic information that allows me as the sender to encrypt my message packets. Message packets encrypted in this way can then only be decrypted with the secret (private) key belonging to the certificate. The messages cannot be read by third parties.

Such a certificate also always contains information from which certification authoriy and for which recipient (subject) the certificate was issued. As a sender, this gives me good clues as to whether I am really talking to the right recipient. Here is an extract from the currently valid certificate for “univention.de”: 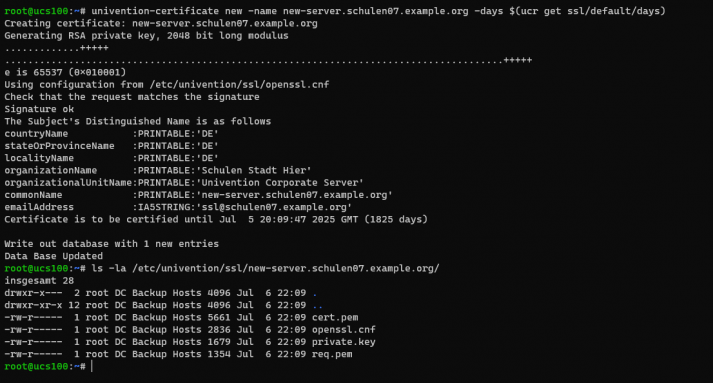 Trustworthy or Not? How to Distinguish Certificates from Each Other

There is one small catch: With the right SSL tool, everyone can create their own certificates and issue them for “google.com”, “their-bank.de” or “univention.de” and in the worst case intercept and decrypt communication. It is therefore essential to be able to distinguish between trustworthy and untrustworthy certification authorities. In the case of the trustworthy ones, we believe that they only issue certificates to authorized recipients with the best of intentions and with a lot of effort and security mechanisms.

The most commonly used applications that need to check these things are web browsers like Mozilla’s Firefox, Google’s Chrome browser, Apple’s Safari or Microsoft’s Edge browser. These browsers or their underlying operating systems come with a list of trustworthy certification authorities. All certificates issued by these certification authorities are usually trusted automatically – as long as the “subject” matches the website it is accessing and the certificate has not expired. (Certificates are only valid for a certain time).

UCS makes use of certificates in many places to cryptographically secure and encrypt network communication between end devices and UCS systems, but also between the UCS systems themselves.

There is one hurdle we need to overcome: How do we get the certificates? Especially if we do not know in advance the name (subject) to which the certificates must be issued? After all, UCS systems can be named at will.

As mentioned above, anyone can generate certificates with the right SSL tools – and that’s exactly what we make use of. A Certificate Authority (CA) for the UCS domain is automatically set up on each UCS master. This authority receives a so-called root certificate, which on the one hand checks and provides identification for the certificate authority itself and on the other hand can be used to issue further certificates. For other UCS systems in the domain, this happens automatically when joining the domain. UCS also comes with a command line tool, which can be used to easily create additional certificates or list and revoke existing ones.

As a result, all services offered by UCS that support SSL / TLS (e.g. the web server, LDAP, listener / notifier, mail server etc.) are directly equipped with a suitable certificate and can communicate in encrypted form.

Test and Use UCS Core Edition

Univention Corporate Server (UCS) is available as an ISO image for installation or as a preinstalled, virtual machine image. With these images, you can instantly use UCS for free as a UCS Core Edition.

For variant a) there is a suitable guide in the Univention forum to solve this for Windows clients via group policies.

And if things need to go fast: A temporary variant independent of the operating system is also described, e.g. for test systems or if you only have a few end devices in the environment:

UCS now offers suitable UCR variables for most services in order to store the certificate files. This means that I don’t have to replace the existing self-issued certificates, but can simply change the configuration options to the new certificates – and this individually for each service. This is described in more detail in the article “Using your own SSL certificates“. 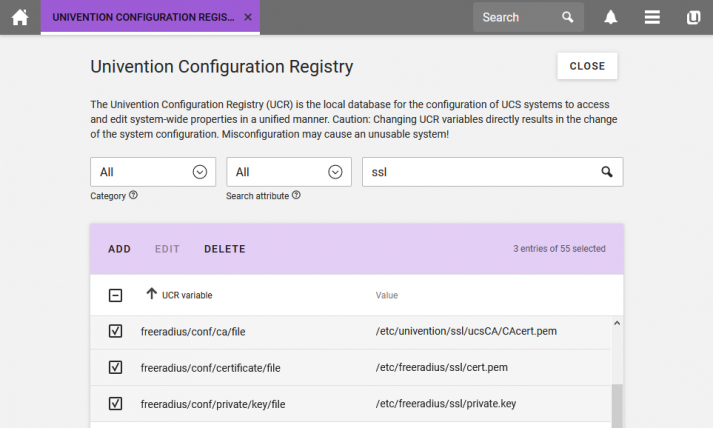 Secure and Affordable – Create Your Own Certificates with Let’s Encrypt

It is even easier with the Let’s Encrypt app from the Univention App Center. Let’s Encrypt started at the end of 2015 to make SSL / TLS encryption the norm on the Internet. To this end, various organizations around the Electronic Frontier Foundation (EFF) and the Mozilla Foundation have come together to obtain and set up certificates free of charge and much easier than before. Let’s Encrypt has meanwhile achieved a remarkable success story. 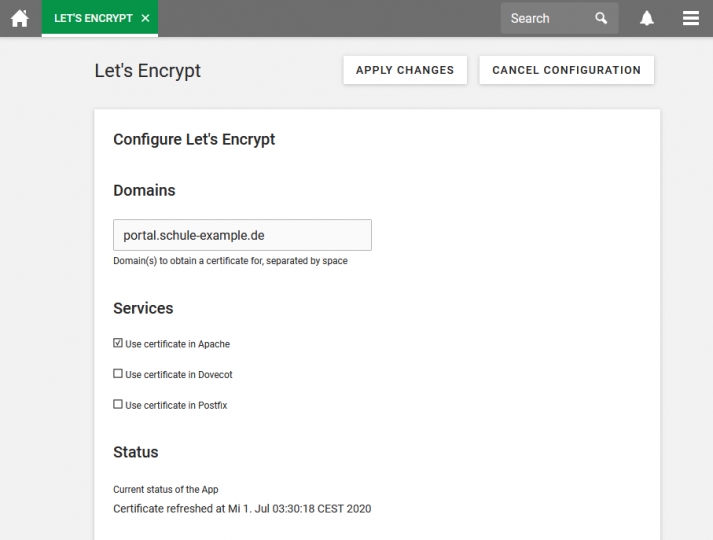 The Let’s Encrypt app from the Univention App Center starts there and independently takes care of obtaining current, valid certificate files from Let’s Encrypt CA, stores them in the server’s file system and optionally configures the services for the web server (Apache2 ), the IMAP server (Dovecot) and the SMTP server (Postfix) accordingly.

Please feel free to write a comment if you have any questions or comments on the topic.