The district of Harz as a school authority recognized early, that a school has different needs than the public administration. Therefore the school IT is separated from the IT structure of the administrative district. Our structures enable us to remain flexible and to respond to the individual needs of the schools. A special school needs other applications and end devices than a grammar school. Nevertheless, both systems must be manageable and functional.

END_OF_DOCUMENT_TOKEN_TO_BE_REPLACED

For the IT administration of organizations with many users, typically also schools, it can be very useful to regulate the access to external websites. From a technical point of view, in order to improve performance when accessing frequently visited pages, but also in terms of restricting access to certain pages, e.g. for security reasons or to protect minors.
The web proxy, which is a central component of UCS@School, is used to improve performance and control data traffic. In this blog article I’ll show you how to configure Squid Proxy with SquidGuard and how to combine both with existing (youth protection) website filters. And with the “Shalla-List-Downloader” I would like to present you a Cool Solution, with which you can further round off this protection and which we have already successfully implemented in various school projects.

END_OF_DOCUMENT_TOKEN_TO_BE_REPLACED

End of Maintenance for Core Edition of UCS 4.3

The Maintenance for the Core Edition version of UCS 4.3 has expired. Users using the Core Edition of UCS 4.3 should update to a more recent version of UCS to further receive security updates, bug fixes and minor releases.
Information about the new features of UCS 4.4 can be found in our blog article UCS 4.4 Release – Admin Diary, Self Services and Windows Domain Trusts.
A description of the steps necessary for the update can be found in the blog article How To: Upgrade to new UCS version 4.4.
Customers with a valid subscription contract for UCS are not affected and will receive updates until the end of March 2020 at least. More information about the Maintenance Cycle for UCS can be found in our Wiki article Maintenance Cycle for UCS.

END_OF_DOCUMENT_TOKEN_TO_BE_REPLACED

Add Seafile, Wekan and Zammad to Your Corporate IT Easily via App Center 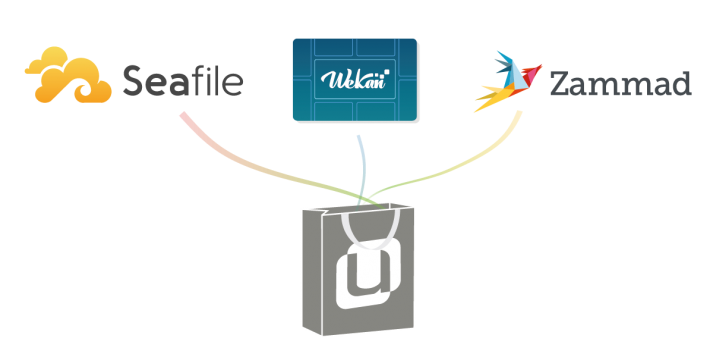 We are pleased to announce a prominent addition to our App Center. Since the beginning of October the German dropbox alternative Seafile, the practical Kanban board of Trello competitor Wekan and the German Zendesk competitor Zammad are available in the App Center. This adds three popular and practical business applications to our Univention Corporate Server (UCS) offering, which you can add to your company’s IT by a simple click.

END_OF_DOCUMENT_TOKEN_TO_BE_REPLACED

Anyone operating IT services for companies or organisations will sooner or later be confronted with this: everything is growing, you need more space for data and virtual machines, at the same time the demands for the availability of services are increasing and the hardware servers also need to be maintained.

Classic solutions for available storage such as NAS (Network Attached Storage) and SAN (Storage Area Network) systems are often expensive and just as often proprietary – and therefore not necessarily the basis you want to build your own IT infrastructure on as part of an open source strategy.

END_OF_DOCUMENT_TOKEN_TO_BE_REPLACED

Jörn Lentes
Brief Introduction, From our Development, Univention Blog
1
Timo Denissen of the Professional Service Team of Univention described in February with the blog article “Desktops with Guacamole remote control” how computers can be remote controlled via the browser. In this How To I would like to show how this principle can be extended with the help of privacyIDEA and xRDP to a terminal server environment which can be used completely in the browser, integrated into the domain of the UCS and secured by 2-factor authentication.
I assume in the HowTo that a functional UCS Master already exists. I run this virtualized using Proxmox. I use a second VM for the terminal server environment.
The following steps are described in detail in this HowTo:

END_OF_DOCUMENT_TOKEN_TO_BE_REPLACED

The Decision has been made: UCS 5.0 is coming!

While we were planning the upcoming UCS development stage, we decided to start working on the next major version: UCS 5.0 is planned for next year. In this article I would like to let you take a look behind the scenes and share some of our plans with you.

It’s been almost 5 years since we released UCS 4.0. During this time, UCS has evolved a lot. At the same time, we’ve continued to maintain the old version’s features. While most of them are popular with our users, others are not. There are also some things we would do differently if we had to do them again. By jumping to the next major version, we would like to get rid of some relics and implement several new features at the same time. We’re still at the very beginning, so not all decisions are final yet – but true to the motto “be open” I would like to share some of our ideas and plans in this blog post.

END_OF_DOCUMENT_TOKEN_TO_BE_REPLACED

Nico Gulden
From our Development, Univention Blog
2
After the release of the UCS 4.4-2 update, technical problems with the DVD ISO and appliance images of UCS 4.4-2 were discovered that interfere with the operation of some important apps. This prompted us to take them offline until further notice. We continue to make the UCS 4.4-1 images available for download, from which users can then simply upgrade to UCS 4.4-2 without the technical problems. In this blog post I would like to give information about the current status and the background.

END_OF_DOCUMENT_TOKEN_TO_BE_REPLACED

Univention adds Seafile, Wekan and Zammad to its App Center

Bremen, October 1, 2019 – Adding apps to corporate IT with a single click instead of complex installations – the advantages of Univention’s App Center have become well known to customers and software providers. The specialist for IT infrastructure and identity management reports prominent growth for its platform: The dropbox alternative Seafile, Kanban board and Trello competitor Wekan as well as the German Zendesk competitor Zammad are now available in the App Center. The software app supply for the operation on a Univention Corporate Server (UCS) is thus growing by three popular business applications.

END_OF_DOCUMENT_TOKEN_TO_BE_REPLACED

We’ve just published the second point release for UCS 4.4. Apart from some bug fixes and corrections, we’ve also implemented some new features and, of course, we’ve put some work into numerous apps.

Looking back at the first point release (UCS 4.4-1 in June 2019), our REST API for the Univention Directory Manager was still in beta stadium. Good news: the interface for accessing the directory service is stable now. The API connects applications to the UCS directory service; access is granted via a web service using HTTPS, and data is exchanged JSON format. So, the REST API offers the same functionality as the udm command line tool.
For example, it simplifies the maintenance of user properties or computer objects from connected systems. Developers of applications offered in the Univention App Center also benefit from the new, standardized access because they are no longer limited to the UDM Python interface. The REST API of the Univention Directory Manager is by default activated on all UCS 4.4-2 DC Master and DC Backup instances.